According to a new report on the aviation actuator system market, published by Transparency Market Research, the global aviation actuator system market is expected to reach value of US$ 2283.9 Mn by 2026, expanding at a CAGR of 6.4% from 2018 to 2026. According to the report, the global market is likely to continue to be influenced by a range of macroeconomic and market-specific factors. In terms of demand, Asia Pacific is projected to continue to lead the global market, with the market in the region expanding at a CAGR of 7.3% between 2018 and 2026. 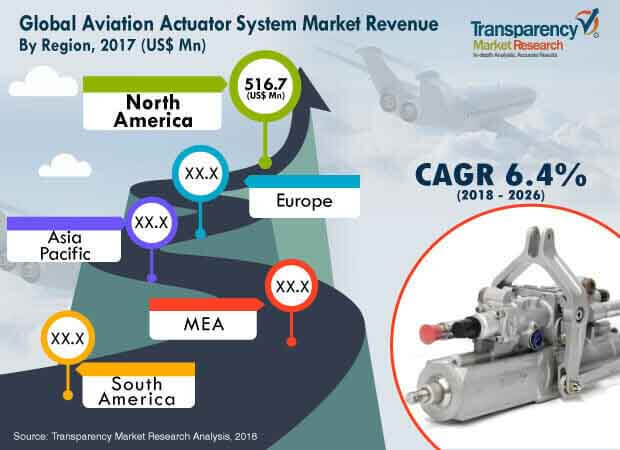 Want to know the obstructions to your company’s growth in future? Request a Brochure here

The global aviation actuator system market has been broadly segmented in terms of actuator type, application, end-use, and region. Based on actuator type, the market has been segmented into mechanical actuator, hydraulic actuator, electric actuator, and others. The mechanical actuator segment was the dominant segment, holding 34.83% share of the global market, in terms of revenue, in 2017. It is expected to expand at a significant CAGR of 6.7% during the forecast period. This is primarily attributable to high demand for mechanical actuators in the aerospace industry. In terms of application, the global aviation actuator system market has been divided into flight control, auxiliary control, utility actuation, and others. The utility actuation segment is expected to expand at a high CAGR of 7.2% from 2018 to 2026, due to rising consumer inclination toward high-reliability actuators and actuation components used in the aviation industry. Based on end-use, the market can be segregated into commercial aviation and defense. The commercial aviation segment is anticipated to register the maximum CAGR during the forecast period, owing to various initiatives taken for the development of electric aircraft.